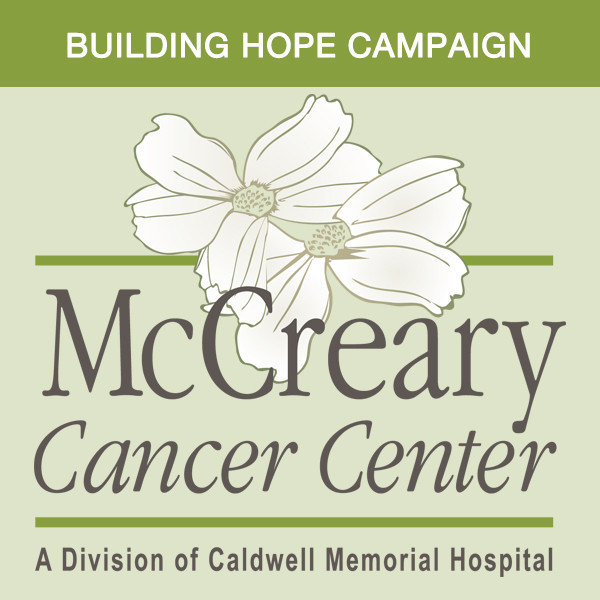 When a patient receives a cancer diagnosis, it can be terrifying. Fortunately, the cancer team at Caldwell Memorial Hospital had a vision to provide a safe, caring and convenient place for patients and their families in their time of need.

In 2011, Caldwell Memorial Hospital Foundation began the Building Hope Campaign to raise $3.5 million to completely fund a new cancer center in Lenoir. A campaign steering committee was formed to lead the campaign effort with the primary objective of developing an integrated cancer center which would bring all of the members of the cancer team into one united location to enhance communication and collaboration to benefit the patients and their families.

The result is the McCreary Cancer Center located at 212 Mulberry Street SW in Lenoir. The new facility, just up the street from Caldwell Memorial Hospital and beside the Wig Bank of Caldwell County, opened in the fall of 2012.

The Building Hope Campaign was not only a great success because of the impact the new McCreary Cancer Center will have in the community, but it has helped to create a strong culture of philanthropy that is certain to continue.

Laura Easton, President and CEO of Caldwell Memorial Hospital, made the following statement at the McCreary Cancer Center Open House on Sunday, September 30, 2012. "Benevolence and generosity of spirit overflowed from the heart of this community. Philanthropic gifts, large and small, were humbly presented. And despite the trials of these economic times, the people of this community saw the need and raised the money to fully fund this new Cancer Center with 'state of the art' equipment."

The William E. and Allene Broyhill Stevens Radiation Oncology Wing and the Wilson Oncology Wing are two of the naming opportunities within the McCreary Cancer Center. Other individuals, businesses and foundations who participated in the Building Hope Campaign are listed on our Donor Recognition page.